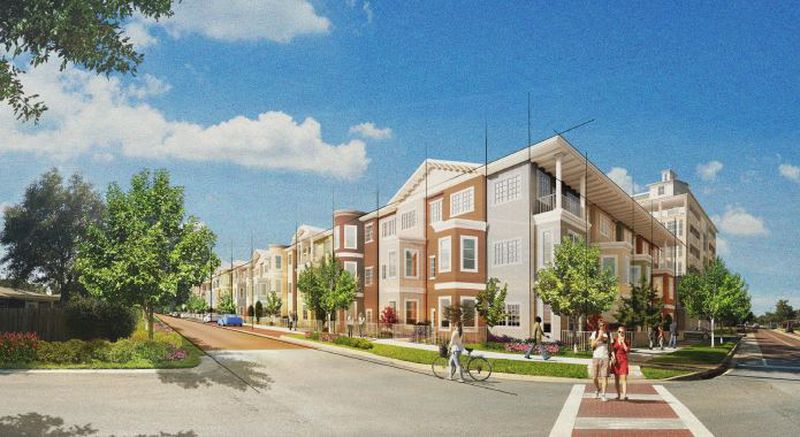 The plans were submitted in response to a Request for Proposals (RFP) issued by the city last year in November to help establish Longwood’s Heritage Village area, which includes the historic downtown district, the recently revitalized Reiter Park and the SunRail station.

“The downtown area is home to a number of significant historic buildings…. but has lacked in retail and restaurant opportunities to fully complete the city’s goal of a destination downtown,” the RFP states. “As the city is the largest single landowner in the district, this RFP is intended to help utilize Longwood’s assets to help support the redevelopment and revitalization of the downtown area.”

The city owns about seven acres in its historic district. TI Group was one of two bidders that submitted applications.  As part of its plans, the developer is offering to build an approximately 8,000-square-foot, multi-story fire station and administration building on a 0.28-acre lot it has under contract at 1450 W. S.R. 434.  In its former location, the developer envisions repurposing the old fire department building and turning it into a firehouse food hall/brewery akin to Plant Street Market located in Winter Garden’s historic downtown.

“By us moving the fire station to a new location, it frees up what will be the vista of the master plan,” McCann said at the meeting. “A lot of times whenever we have clients come to us for this, we’re actually creating a look of a fire station, so it’s pretty cool we can use an existing fire station for this.”  Under its proposal, TI Group also plans to relocate the city hall building and police department to a 3.5-acre property overlooking Reiter Park at 451 W. Warren Avenue. The developer would repurpose the existing medical office buildings on the parcel for the new municipal complex.

On the current police department property, the developer wants to raze the existing station to make way for a mixed-use building that will contain residences, a parking garage and ground-floor retail and office space.

Conceptual plans show the view of the residential building, which will be facing surrounding residents, would feature more of a townhome product with residential stoops, while the other side would feature a slightly taller mixed-use building.  “What we’ve done is we’ve broken the scale down so it’s not just a big block building,” McCann said.

Meanwhile, the current city hall building would be replaced with a roughly 75,000-square-foot senior living community for active adults. It also would contain assisted living and memory care units.  “If we do a project like this, then we do a comprehensive traffic study of the entire area and follow the traffic engineers’ and the city’s advice on exactly how all of this would work,” McCann said.  Additional redevelopment plans include building a parking garage next to the community center, and adding a new retail shop at 304 N. Ronald Reagan Boulevard. At the meeting, McCann said one of the companies interested in the lot include local craft coffee business Foxtail Coffee.

In its initial proposal, TI Group stated it anticipates to create about 150 full and part-time jobs at completion, and approximately $650,000 in sales tax revenue annually.  TI Group is experienced in these kinds of public-private developments. In 2016, it entered into a 10-year contract partnership with Apopka to develop its city center situated between the intersection of US Highway 441 and S.R. 436.

At the meeting McCann said the company will follow the city’s historic guidelines and work closely with staff to make sure the development will be consistent with the local community.

“Don’t think we’re presenting these images and we’re saying that this is final,” she said. “This is just the starting point.”