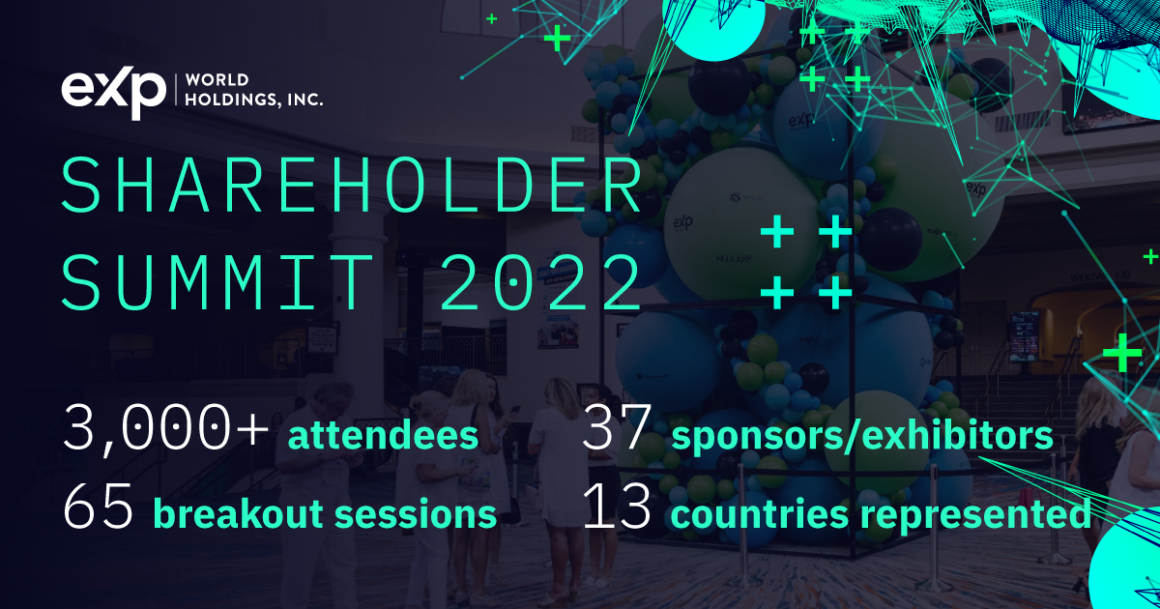 News of the pending acquisition of Zoocasa, an inspirational keynote by bestselling author Jay Shetty, the appointment of new board member Monica Weakley, the announcement of an enhanced SUCCESS Coaching platform and a recap of eXp World Holdings’ impressive year of financial results and growth dominated headlines of the 2022 eXp Shareholder Summit, in Orlando, Florida.

Thousands of eXp Realty agents, shareholders, investors, staff and media attended the energetic and insightful, three-day conference at the sprawling Rosen Shingle Creek Hotel to hear a review of eXp’s 2021 record year of business and get news and updates about eXp World Holdings’ future outlook.

Some highlights from the 2022 eXp Shareholder Summit include:

Sunday Kicked Off With the EXPO Hall and an Evening Reception

For early attendees, the EXPO Hall in the main corridor was buzzing with activity as 37 booths were set up, offering information to help eXp Realty agents build their business. Services included everything from home remodeling services (Curbio) and virtual assistant services (Sphere Rocket) to mortgages (SUCCESS Lending) and personal development (SUCCESS Coaching).

In the evening, an early arrival soiree, sponsored by ISA University, was held in a ballroom at Rosen Shingle and thousands turned out. Drinks and light bites were served while swaying-to-the-ceiling “women on stilts,” a light show and music by the Breezeway Band provided entertainment. It was the perfect reunion among old friends and a chance to make new ones. It got the conference off to an energizing start.

Monday morning started with a wellness event, the E3: eXp, Energize and Engage, which offered activities such as cardio tennis, yoga, posture and stretching, meditation and smoothie stations to promote work-life balance and overall well-being.

This was followed by the always popular XCamp, described as the “unconference conference,” in which eXp agents collaborated on session topics and speakers. eXp leaders such as Brent Gove, Sheila Fejeran, Elizabeth Riley, Michael Collier and many others led sessions on lead generation, social media, marketing and other topics.

Monday afternoon was dominated by the first of two general sessions with the theme “Built for the Future.” During the session, news of the pending Zoocasa acquisition was announced, eXp Realty agent Monica Weakley was appointed to the eXp World Holdings Board of Directors and an inspiring keynote was delivered by purpose coach and former monk, Jay Shetty.

> Read a recap of the first general session here

Jay Shetty Does Not Disappoint: Shetty, a former monk, a No. 1 New York Times bestselling author of “Think Like a Monk” and host of the No. 1 health and wellness podcast “On Purpose,” remarked on how inspired he has been by the forward-thinking mindset at the 2022 eXp Shareholder Summit.

“It’s been phenomenal to hear you talk about new opportunities, new possibilities and the limitless potential that exists within this world and this industry right now,” Jay said. “And I’m going to talk to you today about why connected thinkers will rule the future, why people like you will rule the future of your industry and many other industries and how that’s possible.”

Monday evening, ONE eXp sponsored the eXp Latino Fuerte Mixer offsite at Mango’s Nightclub. It was a colorful, vibrant event in which lively Latino music was pumped throughout the venue, making the second day of the Summit a party to remember.

The final day of the Summit was packed with interesting activities and events, including a 5K, the second general session in which technology and personal and professional development were showcased and a closeout party at Universal Studios.

5K Fund Run Starts the Day – At daybreak, approximately 340 intrepid runners took part in the early morning 5K Fund Run along the grounds of Rosen Shingle Creek, in which more than $28,000 was raised with proceeds going to eXp’s 501(c)(3) nonprofit eXtend a Hand. The top finishers were a husband and wife from Louisville, Kentucky: eXp Realty agent Laine Bowling and Dr. Kyle Bowling.

Glenn Sanford also delivered some big news: The SUCCESS Coaching program will be enhanced with certification and an aligned compensation model for agents and brokers as well as equity opportunities for SUCCESS coaches will be offered. Not only will this news help eXp Realty agents and brokers gain valuable coaching experience and insights, but it will also offer them another revenue stream.

Santonastasso spoke about how despite being born with Hanhart Syndrome, a rare congenital disorder that causes malformed extremities and fingers, the worst disability someone could have is a bad mindset. By adopting a high-energy mindset and surrounding himself with inspirational people, he has become extremely successful.

The three-day Shareholder Summit was capped with a closeout Ending Bash at Universal Studios on Tuesday evening, where eXp agents enjoyed free reign of the park and rides, including the popular Wizarding World of Harry Potter. Complimentary food was available throughout the park, and a fireworks/water celebration ended the night.