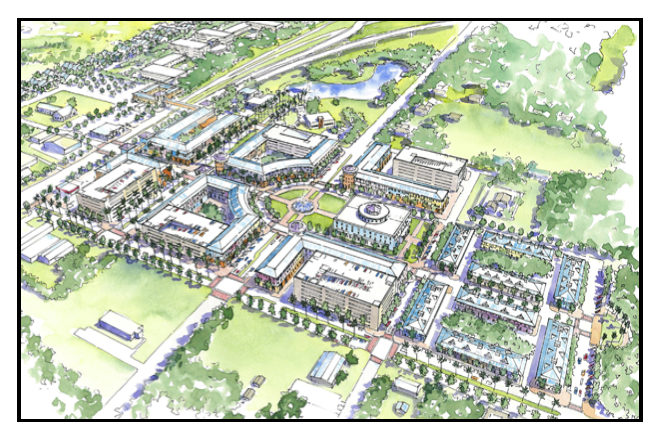 A highly-anticipated, roughly 100-acre project is expected to start work next year.

Currently, the developers are seeking approvals with the city of Apopka and other state agencies.

The new project — which will include an apartment development — will add housing near the growing 180-acre, 2.4 million-square-foot Mid-Florida Logistics Park. The northwest apartment submarket, which includes Apopka, has a 2.9% vacancy rate, Charlotte, North Carolina-based Real Data Inc. reported. That shows demand for apartments as the vacancy rate is lower than the Orlando-area’s 3.5% average. The submarket has 9,194 total units.

The Floridian Town Center project is expected to feature:

Nearly all the acreage has been acquired in the past couple of years after the project was announced, Benge said. He’s set to buy the final parcel in June.

The entire project may take five years to fully build out, which could push construction through 2026. So far, the project team includes Homestead, Pennsylvania-based GAI Consultants and Winter Park-based Donald W. McIntosh Associates Inc. A general contractor has been selected.

The expansion of State Road 429 — coupled with new companies adding jobs — has made Apopka a hot spot for housing and other development, said Andy Slowik, director of land brokerage at Cushman & Wakefield PLC (NYSE: CWK), who has worked on land deals in Apopka. The market is expected to continue to see developers vying for land as more people move to the city northwest of Orlando and as the 429 construction work completes.

“There are a lot of eyes on Apopka,” Slowik said.

“It’s normally a pretty good indicator you’re in the right market when tenants like that start dropping in next to you,” Benge said.

New development is important as construction employs roughly 90,000 workers and creates billions of dollars in annual economic impact to the region. That said, some construction projects have slowed down or paused in recent weeks due to the pandemic.

But some construction experts say that the industry’s resiliency during Covid-19 may make it attractive for people searching for new work. “I’m looking at this as being an upswing for our industry,” Nancy Merced, executive director for Orlando-based Academy of Construction Technologies Inc., previously said. “People aren’t just working but they’re getting overtime.”

Meanwhile, beyond the Floridian Town Center, the city of Apopka also is seeing other industrial, single-family and retail growth across the city. For example, a roughly 73,000-square-foot, Publix-anchored shopping at 4966 Plymouth Sorrento Road recently moved ahead with its project. And at least three other industrial projects are in the works.

“It’s been a quiet boomtown,” Benge said. “I get yelled at once a day about getting this thing going.”