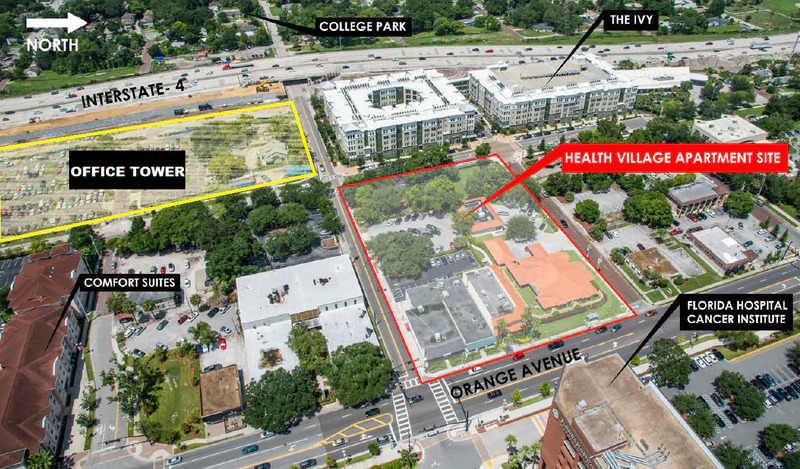 AdventHealth is advancing plans for a new medical office tower in its Health Village complex north of downtown Orlando.  The healthcare company has notified the city it will be seeking final site plan approval for “Project Lego,” which involves the infill redevelopment of a parking lot between East Orlando and East Winter Park streets, just east of Interstate 4.

City Spokeswoman Samantha Holsten said the company has not uploaded any plans, but the project description calls for a 12-story medical office tower with a parking garage. The 15-parcel assemblage also includes a two-story building at 228 E. Winter Park St. currently occupied by the nonprofit organization, Kids Beating Cancer, which likely would be demolished.

AdventHealth declined to comment on the project. Gray Robinson is representing the company on its site plan approval.  The new tower would house a mix of medical offices, research and testing centers, healthcare services and hospital uses, according to Ustler Development President Craig Ustler, who has been briefed on the project. Ustler is co-developing the Alta at Health Village apartment community just northeast of the Project Lego site.

“It is nice to see some more of the pieces coming together at Health Village,” Ustler told GrowthSpotter. “There needs to be more density and a more intense mix of uses in order to fully realize the vision and mission of Health Village.  New anchors, like the medical office building, are important.”

Ustler and co-developer Wood Partners are well into construction of the 285-unit urban-style apartment building. The joint venture partners paid AdventHealth $5.65 million for the site. That project is scheduled for delivery in mid-2021. Ustler said he does not object to the height of the new medical tower.

Meanwhile, AdventHealth is in the midst of a 45,000-square-foot emergency room expansion at its downtown Orlando hospital and an expansion of the McRae Parking Garage at Health Village. The company is also expanding in the Orlando region, planning new Health Park campuses in Clermont, Lake Nona and Kissimmee.