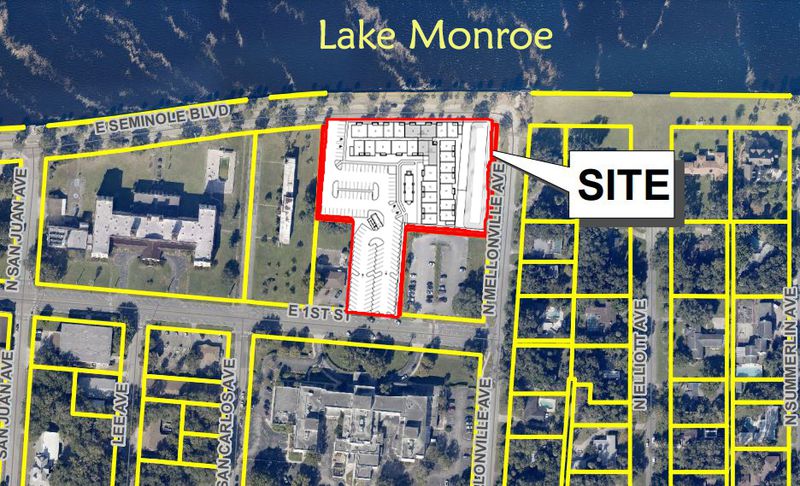 A prime lakefront location in Historic Downtown Sanford, previously owned by the late business owner and Heathrow developer Jeno Paulucci, is being eyed by Essian Construction & Development for its next real estate project in Central Florida.

The Altamonte Springs-based developer has about three acres of land under contract with plans to establish a new Planned Development called the Vistas at Lake Monroe. The company’s rezoning application is set to go before Sanford’s Planning and Zoning commission for a public hearing later this week.

Chad Moorhead with Madden, Moorhead and Stokes is the civil engineer.  Submitted plans entail building up to 150 multifamily units within a single 4-story building at 1100 E. 1st Street. The conceptual lakefront apartment building features a mix of one- and two-bedroom apartments, as well as a clubhouse and pool.

Richard Shassian, president of Essian, told GrowthSpotter the company is under contract to purchase the property for a price he cannot disclose at this time.

Seminole County estimates the three parcels have a combined assessed value of more than $1.6 million, according to its 2020 property tax roll.

“It was a great opportunity brought to us through relationships in the construction world, Shassian said. “We’re a strong believer in Seminole County and the City of Sanford.”

Opportunities for growth and a stable real estate market helped cement the deal, he adds.

The property owner, Paul Mellini, acts as a trustee for the Paulucci family trust.

Jeno Paulucci led a frozen-food business empire in Florida and Minnesota. Notably, he’s known for creating Jeno’s Pizza Rolls, which he sold to Pillsbury in 1985 for $135 million. Pillsbury later rebranded the rolls as Totino’s in 1993.

It was during the 80s when Jeno Paulucci started developing the ritzy community of Heathrow.

For years the future of the Paulucci family estate stood in limbo as the family disputed the inheritance of its family fortune in court after Jeno and Lois Paulucci passed away in 2011.

According to the Duluth News Tribune, a settlement was reached in 2019. Since then, Mellini, as a successor trustee, has been busy selling off properties in Sanford owned by the family trust.

The NRP Group, a Cleveland-based multifamily developer and property manager, is under contract with Mellini to purchase more than 20 acres of woodlands along Upsala Road in Sanford with plans to build a 352-unit apartment community.

Last year, the businessman’s 4,200-square-foot Sanford home at 2020 Washington Ave. was put on the market for nearly $1 million by its current owners, Garth and Erica Bolton.

The Lake Monroe site under contract with Essian sits just north of the Seminole County Services Building. New development in its location must abide by standards set by the city’s Midtown Overlay District and Waterfront/ Downtown Business District.

Nearby Suncor Properties is planning a new townhome development and an adjacent hotel on vacant land next to Henry’s Depot food hall.

Key Performance Hospitality Management paid $3.5 million in 2017 for the historic Mayfair Inn hotel on Lake Monroe with plans for a $30 million renovation.

Shassian said Essian, founded in 2002, has five developments under construction in Florida, including a 324-unit apartment community called The Robert in Fort Myers, and a 228-unit multifamily development in Cape Coral called Surfside Apartments.