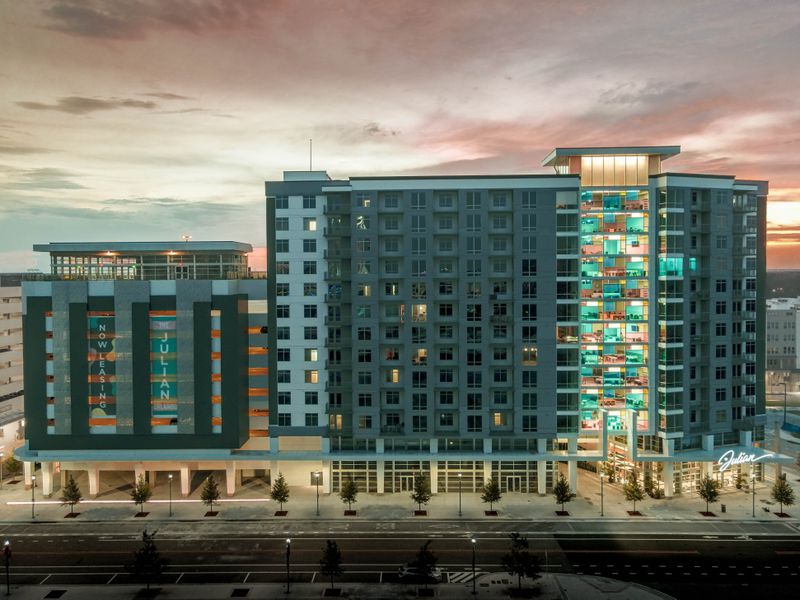 Orlando-based Good Salt Restaurant Group will develop its fourth dining concept in the anchor space at the recently completed The Julian Apartments in Creative Village.  Owners Jason and Sue Chin announced they had signed on to lease the 6,000-square-foot commercial space and are developing a new concept and menu for the restaurant, which will be named “The Monroe.”

The name is an homage to the late Dr. William “Monroe” Wells, an African-American physician who built and operated the historic Wells’ Built Hotel in Parramore – the only hotel to welcome Black guests in the early 20th century.

Creative Village master developer Ustler Development and The Allen Morris Company co-developed the $108 million mixed-use building, the first market-rate rental community in Creative Village. The 14-story building was completed in the summer and currently has about 55 tenants and another 20 who have signed leases.

Craig Ustler told GrowthSpotter he approached the Chins about developing a new restaurant for The Julian and found they had a lot of similar ideas about the project. They wanted it to be authentic to the neighborhood and inclusive.  “The key is to not be a high-end restaurant,” Ustler said. “We want it to be quality, but not too expensive because a lot of our residents will be students. It has to be something for everybody.”

Good Salt currently operates Seito Sushi Baldwin Park, The Osprey and Reyes Mezcalieria. Ustler is a partner with the Chins on Reyes, so to seal the deal, he took Allen Morris to lunch there and later to dinner at The Osprey. Ustler even offered up the name, noting that it was a strong contender for the apartment building.  “We wanted the building to have a personality. We ended up choosing The Julian, but The Monroe was right up there,” Ustler said. “I liked the connection to the neighborhood, and that it was a way to be respectful of the past while looking to the future.”  Jason Chin, who serves on the advisory board of the Valencia College Walt Disney Center for Culinary Arts, plans to integrate the restaurant with the curriculum programs at the school while also tapping into the local talent pool enrolled there.

Sue Chin is working on the design now, which will include a main dining room, a bar/lounge that doubles as a study area, a semi-private dining area and outdoor space that overflows into the building’s interior courtyard. Originally, they had hoped to open the restaurant around the same time the building residents began moving in. “But then Covid happened, and everything got delayed, ” Ustler said.  The official opening date is listed as 2021. Ustler said it’s likely the opening will take place in August to coincide with the beginning of the 2021 school year and the completion of the EA Sports building.  “I wanted to give them the flexibility to know that as a developer, Ustler and Allen Morris were going to be supportive of them,” he said. “As I’ve gotten older and wiser on the retail front downtown, I’ve learned it’s not about quantity — there’s plenty of retail space downtown, and it’s all empty. It’s about quality and curating the right tenant.”

He said they expect to submit building permits this month. The Chins also will manage the 8,800-square-foot “front porch,” and open-air public space fronting on Terry Avenue, across from the 2.5-acre Creative Village Central Park, which will be underway in October.  “We will be looking out on that Central Park from our front porch,” Salt Group marketing director Makaela Falter said. “There are going to be a lot of exciting events planned there, so we will be an integral part of that community. We’re excited to be a part of The Julian lifestyle.”

The front porch will also be one of the many pet-friendly areas in The Julian. Ustler said the development team expanded the pet amenities for the building to include multiple dog wash stations and pet relief areas on each level of the parking garage. The company has also relaxed its policies on weight limits and pet rents and even schedules mobile groomers to be on property every week.  “A few years ago, before Covid, we could charge $100 a month in pet rent. Now we just charge a deposit. We used to restrict pet owners to the first floor because we didn’t want to get fur in the elevators,” Ustler said. “Now that the market has softened, we allow pets on every floor. It’s a vital marketing strategy at Creative Village because that’s one of the features that might draw someone who was in the student housing at Union West.”